Cherilyn Sarkisian, known by her diminutive stage name, Cher, is an American actress and singer. This iconic star has enjoyed a successful career in the various areas of the show business thanks to her distinctive voice and her ability to reinvent herself, both in her music and her image, which earned the title of ’Goddess of Pop’ and allows her to still be very much active at 67 years old.

Although her looks have always been as distinctive as her unusual voice, it is quite obvious that Cher has gone under the knife, in other to reinvent and refresh her look, and keep on top of her game in an industry as competitive as that of entertainment as long as she has. However, as obvious and defining as her plastic surgery history is, along with her daring looks, like her negligee outfit at the Oscars in the 90s, and her many tattoos, Cher has always denied having had some work done, going as far as stating she has ’had the same cheeks her whole life’ and denying having a a butt lift or any ribs removed, as opposed to having removed her tattoos.

Pop culture specialists and plastic surgeons alike don’t buy Cher’s nonchalance about her physical appearance. While some think Cher’s plastic surgery experiments are closely tied with her reinvention and the progress of her career, calling it almost a career statement, some defend it being something more subtle, a gradual shift from her distinctive features to more conventional ones, as a way to stay youthful and keep pace with society. 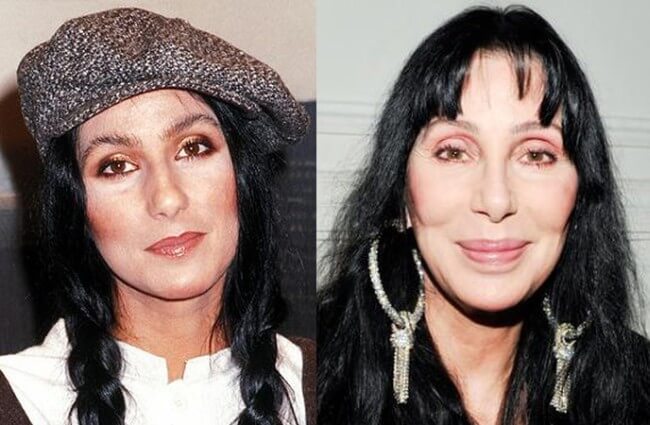 Theories about Cher plastic surgery changes are abundant, especially those about her flat stomach, leading to her denial of having ribs removed. However, she is also supposed to have had a facelift, Botox and fillers to stay youthful, as well as eyelid surgery. Although she won’t admit to all of her procedures, the general opinion is that she is a ’poster girl’ for good surgery due to her amazing and youthful physical shape and age-defying appearance.

Cher will admit to some of her cosmetic procedures, namely a nose job and her notorious facelifts. She does, however, also not shy away from talking about her bad experience with breast augmentation, which she went through after her daughter (now transsexual Chaz Bono) was born, because she couldn’t bear to see her then naturally enlarge breasts ’deflating’. The iconic singer admits her bosom was ’completely botched’ and ’worse after than before’. 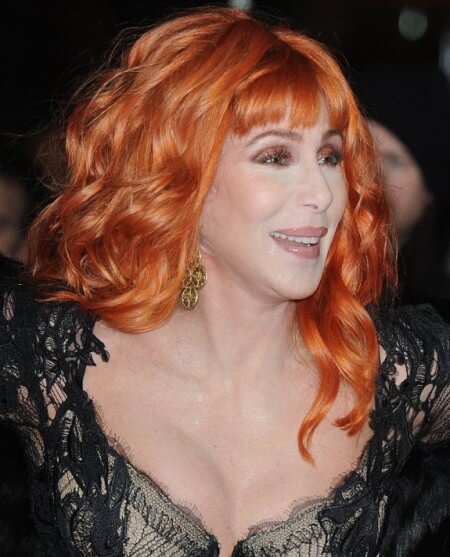 Going under the knife isn’t all Cher does to keep youthful though, as she admits she won’t do so much to ’hold back her process’. She was actually controversially caught using tape to keep face wrinkle-free on the red carpet, by tightening her skin, a popular trick among Hollywood stars and drags queens alike.

Any angle you choose to look at it from, though, you can’t really fault Cher for her plastic surgery procedures, as the star looks lovely, and is actually aging quite gracefully, despite maintaining her face looking useful as she is about to turn 68 years old. And having a reputation for being a ’plastic surgery poster girl’ can’t really hurt if she her star is still shining as brightly, even starring alongside must younger beauties like Christina Aguilera and Dianna Agron.

« Kim Kardashian Before and After Plastic Surgery